A good way to see what went wrong.

When something goes wrong and you need to know about it, the MantaStat Element Status Display can help.

The MantaStat ESD Element Status Display can be viewed with a browser on any device including a desktop PC, tablet, or smartphone.

The MantaStat ESD screen format supports categorizing your elements into groups and categories the way you want. All headers and categories are customizable.  The color of the elements in the category row represent the highest severity of alarm for that column.  For multiple page displays, the actual element alarms rotate with the page cycle, but the category element always reflects the element with the highest severity of alarm.

Each element is designed to show the Asset Name, Location, and Responsible Organization. This information can help personnel respond to problems and contact the people most likely to be able to help.bus leo. 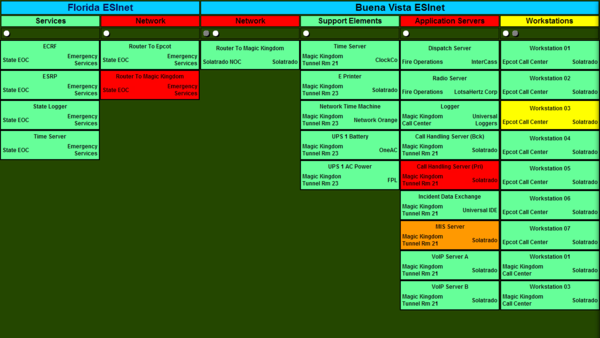 There are four states for elements. The alarms that control four of the states are often configured to be Critical, Major, and Minor. The fourth state is clear.

In each column, the category element color reflects the element with the highest level of severity in the column. Columns can include multiple pages that are cycled to show all elements.

Each of the four alarm events has an associated sound that is played when the event happens and one sound when an alarm is cleared. Several audio files are included and users may add their own sounds for each of the four events.