What it does if a test fails

The MantaProbe ALS/Patlite Network Monitor Alarm Light System with Audible Alarm is a complete network monitor and alarm light system in one device. Our standard configuration consists of a light tower with four LED segments and a programmable audible alarm with volume settings. Three and five light configurations are also available. The four light modules can be configured to indicate the status of network elements. Up to 24 devices can be pinged and many more can send SNMP traps to the MantaProbe ALS. The status or alarms of any monitored device can be configured as Critical, Major, and Minor categories. The Green module can be configured to indicate the status of the Alarm Light System’s connection to the network.

Email and SNMP Notification: Besides controlling lights, alarms can trigger emails to be sent to anyone you want and SNMP traps to be sent to network management systems.

What you get: The MantaProbe ALS includes the Patlite light tower with:

Pre-configuration Option: We will set up the system with your IP address and configure ping alarms for up to 24 devices, categorized by Critical, Major, and Minor alarms. All you have to do is plug in the AC adapter and connect it to your LAN.

Here is an example of how the MantaProbe ALS/Patlite can help identify network conditions that interrupt operations. 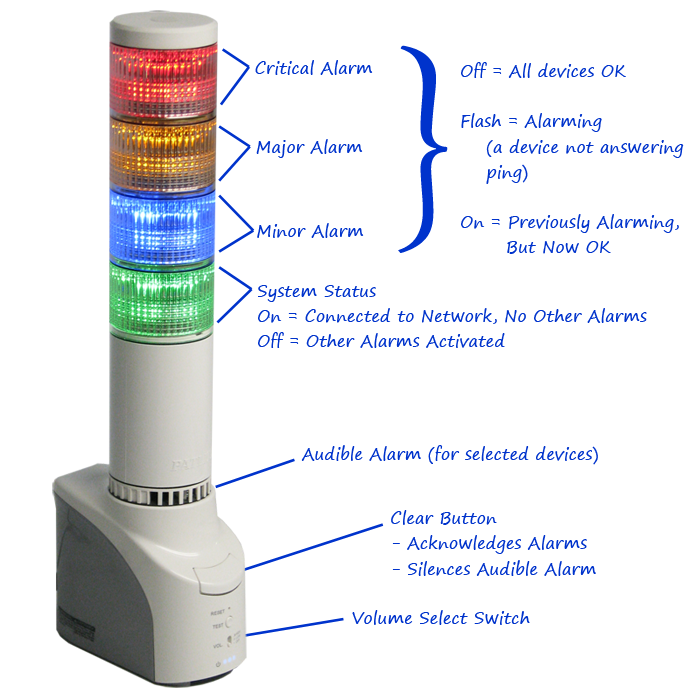 The behaviors of the lights, audible alarm, and clear button are all configurable.  Here is a suggested configuration for a system testing a number of devices using pings.

In this example, the IP addresses of devices are entered into the MantaProbe ALS and assigned a color that represent the severity of alarm if the device fails to answer pings.  When a device is assigned a red (critical) category and it does not answer pings, the top red module will flash.

An audible alarm can also be configured.  If the device starts answering pings again, the red module will stay solid red, indicating that there had been a critical alarm.  The solid red, amber, and blue lights stay lit until the “Clear” button is pressed, acknowledging the alarms.